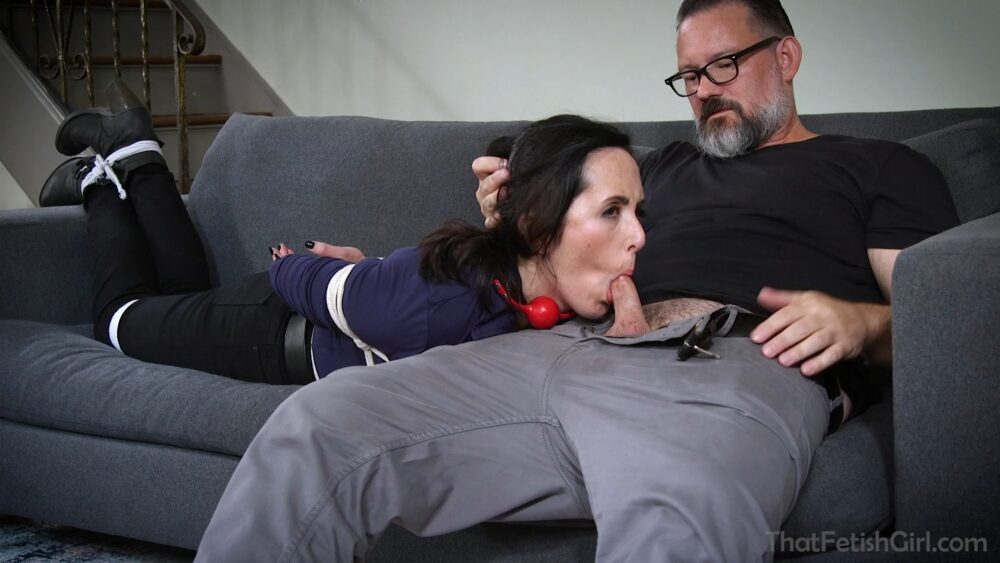 Dixie sits on the floor all tied up with her lips closed around a ball gag. Her ties are tight and she knows she can’t escape. Sometimes her frustration spikes and she struggles heavily against the ropes for a few seconds. She does so not dare moan or cry, to not get her captor’s attention too soon. Dixie is a hostage in a stranger’s house but she knew what awaited her and let herself be taken. She’s being to spend the weekend there because that’s the deal she accepted to get herself out of trouble. She’s been promised to be set free after she keeps up her end of the bargain. The man comes into the room and looks down at her for a brief moment, not saying a word, she stares back with silent anger. He sits down behind her on the floor and pulls her close to him. He starts to touch her body, patiently but getting more intense while Dixie lets is happen. He runs his fingers between her legs and starts to rub there, while the other hand changes between groping her breasts and handgagging her. He gets up and lifts her onto the couch on her belly. He sits and places her head on his lap. She can’t hold back some disgusted moans as he strokes her head and pulls out his dick. She tries to resist when he starts to unbuckle the gag. "Remember the deal" he says as he just loosens the gag far enough to pull it out of her mouth and let it hang around her neck. He slaps his dick against her lips and she hastily opens her mouth and sucks his dick. She gives him a blow job and continues to try her best to keep her silence to give him as little satisfaction as possible. As he face fucks her, she can’t hold back moans and gagging sounds. He cums into her mouth and her to take it. When he is done he immediately regags her with the ball gag. She coughs and gurgles, drooling his cum as he gets up and puts her in a sitting position on the couch. He leaves the room and she is left to struggle and drool, breathing angrily and struggling frustratedly against her ropes.

Dixie now lies on a mattress in a basement on her side, tied and ballgagged. There are some bondage tools lying around the mattress. She struggles and moans a bit, testing her ties and gag and searching for weak points. Her captor comes in and drops a butt plug on the mattress right in front of her. She closes her eyes and lets her head fall back in disbelief. Her captor lies down on the mattress behind her and starts to run one hand between her legs where there is a significant hole in her pants. He begins to massage her pussy and asshole. He then takes some lube and proceeds to slowly lube up her asshole. He then takes his dick out of his pants and starts grinding against her body, then closes her hands around his dick and she reluctantly starts giving him a hand job. He pulls his finger out of her, takes the butt plug and a hitachi and slips the plug into her tight ass as he vibes her clit. She can’t help but to let out a muffled scream. He gets a black hood and tape from the stuff lying around the mattress. He then takes off her ballgag. "You sick freak" is all she can say out of breath. He puts the hood over her head, adheres a tape blindfold and puts the ball gag back in her hooded mouth. He gets a small vibrating egg and inserts it in her pussy. Dixie does not like that thing inside her at all and protests by struggling and moaning. He activates the egg and watches her struggle for a moment, then hovers over her upper body while he jerks himself off. He finishes and cums in between her breasts into her polo shirt. He gives her ass one loud slap and leaves the room. Dixie lies on the mattress and being vibed, cums. She breathes and moans and struggles against her ties. She tries to reach the butt plug and the vibrator but can’t reach. She feels the sudden urge to piss but is reduced to wetting into her pants. After finishing she moans in frustration and struggles against her bondage again. 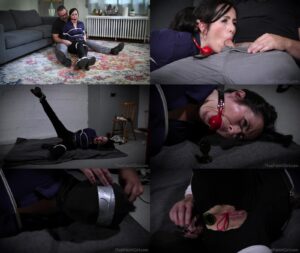